Freestyle Komics is a comic publishing studio. A studio focused in creating stories and characters you can unite and relate too. At Freestyle our mindset is anyone can be epic no matter shape, size, or color of ones skin. We all have the ability to be heroic or a villain.
"Since S.P.A.C.E 2009 the guys from Freestyle Komics almost seemed to come out of nowhere. To be honest before day one of that two day show I had never heard of them or their ongoing comic Hotshot. Now, just seven months later it seems that everybody knows who Mike Watson and Victor Dandridge are. More importantly they know who Freestyle Komics are. Scott and I have wanted to get Mike and Victor in the store for a book signing since Champion City Comic Con where the now legendary Freestyle Sketch Battles were given birth. Their combined energy and enthusiasm took over the entire second floor of the con and when they sat down at the Independent Thinking panel at the show along with their peers in the field, took off those masks they wear as the "Masters of Self Promotion", and got down to the basics of talking business. People listened.
And people are still listening." 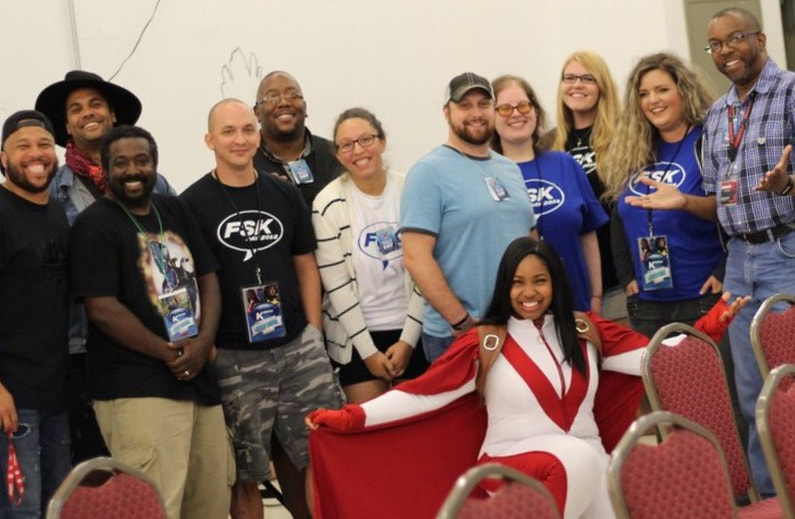 Meeting the people behind the Freestyle table is an experience and one you will never forget. If it's the first time you've done so...or the tenth.
The crew has leveled up since those beginning years of comic book crafting. "The Four" as they have just been labeled in this very writing have come to the head of the classroom of FSK through different paths that met in the middle. Laurie Foster bringing her  tenured inking experience and leaderships skills in business developed thru her career but honed at Unlikely Heroes Studios as the FSK Business Admin! Veronica Smith starting off as a colorist for Hotshot and thru the years she has turned herself into the lead colorist and the Associate Editor at FSK. Danny Cooper with his sharp eye and attention to detail started as a fan, moved up to a letter, then the editor and not holding domain over all he sees and touches as the Editor in Chief.
Now after a journey that has yet to be complete the FSK team has failed, grown, succeed and learned. Ready to put together a new vision with great comic titles as Hotshot, Vigilance, Heroes International , Five Star, Spider Squirrel, Tiajitsu gates, and more.